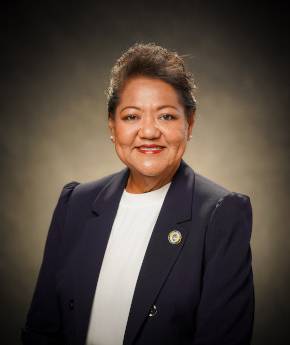 In her formative years, Louise attended Lyndon B. Johnson Elementary School, Tamuning Elementary School, and Agueda I. Johnston Middle School. After graduating from John F. Kennedy High School, Louise went on to further her education at the University of Guam.

Through her work experiences, Louise held positions in various agencies within the Government of Guam including working as an on-call substitute teacher for the Department of Education from 1989 to 1990. After a short time at DOE, Louise found herself working as the Municipal Clerk of the Tamuning Mayor’s Office under former Mayor Al Dungca and Vice Mayor Terry Borja from 1990 to 1997. In January 2000, she worked for the Guam Memorial Hospital’s Nursing Administration as a Ward Clerk. She then found herself returning to the Tamuning Mayor’s Office under the Duenas-Leon Guerrero Administration where she assumed her duties as Municipal Clerk until 2003 when she became the Program Coordinator for the University of Guam’s Financial Aid Office until June 2004.

By then it was clear that Louise was meant to be in service to the people of Tamuning, Tumon, and Harmon. In 2004 she ran a successful campaign, winning her place as Tamuning’s Vice Mayor. She won two consecutive elections, thereafter, serving two terms as Vice Mayor. Her service and passion were evident to the people who elected her their new Mayor in 2012 and has since served as Mayor, winning her third consecutive Mayoral election in 2020.