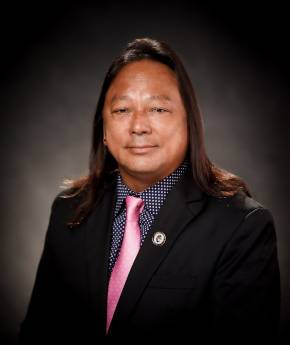 Vice Mayor
Municipality of Barrigada
Jessie P. Bautista was born on May 13, 1966, as the eight child to †Antonio G. Bautista and †Augustina A. Perez. He is the proud father of son Devin Herrera and daughter Jessie C. Bautista. Jessie is brother to Connie, Doris, †Bernie, Anita, Anthony, Joseph, Frederick, Therese, Frances, and Robert. He was raised in the village of Barrigada where he was first elected Vice Mayor in 2012 and because of his commitment and dedication to make a difference, he has achieved his third term as Vice Mayor, running unopposed in the 2016 and 2020 elections.

Vice Mayor Bautista graduated from George Washington High School and furthered his education at Downey Community College in California. Upon his return home he worked at AK Yamaha as a supervisor. Before entering public service, he partnered with a longtime friend, assisting with maintenance and repairs of rental units. Concurrently, he worked closely with Government and private entities, in the restoration of asphalt and concrete roads.

During his tenure, he had garnered the support from his colleagues to serve as Sergeant-at-Arms for the Mayors’ Council of Guam (MCOG) from 2017 to 2020. Vice Mayor Bautista has served as Committee Vice Chair for the Stray Animal Round-Up (SARU) from 2012 to 2020 and is currently a member of the “Un Guinaiya” Lions Club.

Vice Mayor Bautista’s accomplishments include the installation of a new traffic light on Route 8 and resurfaced of sections on Route 8, tri-intersection and Route 16 roads, with federal funding directed by Department of Public Works. On July 9, 2019 the unveiling and dedication of the newly built “Kalaguak Memorial” honoring our CHamorus who were enslaved, beheaded and massacred by the Japanese Imperial, partnered with Mr. William “Willy” Flores and the Manenggon Memorial Foundation. Together with Mayor June Blas, formed the Barrigada Crusaders as the First Village Youth Football Team. In 2018, successfully acquired, through legislation, 43 Acres in Tiyan, Barrigada, to include the existing football and softball facilities, for much needed Recreational Facility. In 2017, acquired playground equipment from Modern International, Inc. and Ian Corp. and 7.9 Acres of CHamoru Land Trust Properties for Sports Fields. Alongside Mayor Blas, they launched an active Neighborhood Watch program to assist in deterring resident break-ins and illegal activity in June 2013-present; recipient of Liberation day Float Competition Award in 2015 3 rd place and in 2018 took 1 st Place; worked simultaneously with Mayor June Blas, private sectors and the community of Barrigada to host Papua New Guinean Delegates during the 12th Annual Festival of Pacific Arts (Guam) in May 2016.

Vice Mayor Jessie Bautista has worked amicably and cooperatively with Mayor June Blas. They have worked tirelessly with their village schools, and various government agencies, to address the safety and welfare of the residents. The flooding issues; stray animal concerns; upgrade infrastructure such as roads, water and sewer lines, replacement of wooden power poles to concrete, just to name a few. They had organized youth sports, cultural dance groups, ZUMBA, MixxedFIT, Yoga, Minor’s Taekwondo and other organizations, to enhance and encourage their residents to live a healthy lifestyle. Vice Mayor Jessie Bautista and Mayor June Blas believe in serving the community in the One Team, One CommUNITY approach.