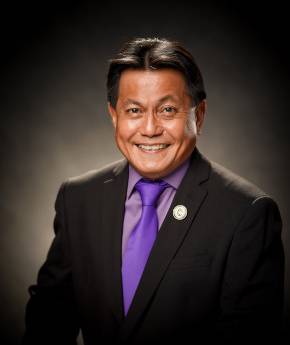 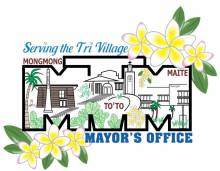 Mayor
Municipality of Mongmong-Toto-Maite
Mayor Rudy Aguon Paco will be serving his second term as the Mayor of Mongmong-Toto-Maite, where he was born and raised. He is the youngest of eight children of +Policarpo Cortez Paco and +Fidela Aguon Paco. He is a graduate of George Washington High School and married his high school sweetheart, Victoria Gumataotao of Santa Rita. They have two children: Mathew (Reina Guevara) and daughter Krystal Paco-San Agustin (married to Robert San Agustin). He has one granddaughter, Isabella.

In 2010, after 25 years of service, he retired from the federal fire department as a fire captain. While he shifted his focus on his painting and roof repair business, he set his sights on his longtime dream of leading the tri-village beyond his commitments as a Nuestra Señora de las Aguas Parish Council Member and MTM Mayors’ Council Member. In 2016, he ran a successful campaign for MTM Mayor and was deeply humbled by the opportunity to serve his neighbors.

The foundation of his first term was built upon establishing strong working relationships with agencies and businesses. Working closely with the Department of Public Works (DPW), he completed several road repair projects, including the installation of reflectors and striping, widening of roads, and non-skid resurfacing of notoriously slippery streets. Working with the private sector, he was able to provide barricades along bus stops for student safety.

The most important partners in his first term have been the MTM community. In his first year in office, he created the tri-village’s first-ever Neighborhood Watch Program (NWP), now over 250 members strong. Keeping with community partnerships, he improved communal facilities, completing renovations to the MTM Community Center and the Toto Baseball Field, including the installation of lights. Noting a lack of fitness facilities, he executed a quarter-mile walk around, used today by joggers and walkers. Due to the ongoing COVID-19 pandemic, there have been delays to the enclosure of the Toto Basketball Court, which he looks forward to completing in his second term. These projects will complement the continued growth of MTM, evidenced by the construction of additional low-income housing and increased business presence.

Since taking office, Mayor Paco has increased the community’s morale. Every May, he and his Municipal Planning Council (MPC) have sponsored a manåmko’ celebration to commemorate Senior Citizens Month. During the holidays, he sponsors Halloween and Christmas events, paid for through yearlong fundraising efforts and solicitations. For the island’s historic 75th Liberation, he led the tri-village to a first- ever victory—a third place win in the annual Liberation Parade themed, “A Legacy of Peaceand Friendship.”

Mayor Paco has always advocated for the health and safety of his community. In the 1990s, he challenged the federal government to perform testing of not only soil, but residents whose health may have been impacted by the Navy operated power plant and the polychlorinated biphenyl (PCB) contamination. He also lobbied for safeguards from sound pollution from the nearby Tiyan runway and low flying planes.

Mayor Paco is a Guam Regional Transit Authority (GRTA) Board Member and a member of the Lions Club. When he’s not working, he enjoys spending his limited leisure time with his dogs at his ranch.