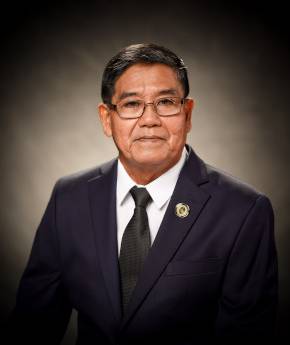 Vice Mayor
Municipality of Yigo
Loreto “Lito” Visperas Leones is the son of the late Roberto Baliton Leones and Pilar Degano Visperas Leones, originally from Bani, Pangasinan, Philippines. Lito was born on May 22, 1955. He is the second eldest of five brothers and one sister. He migrated to Guam with his siblings to join their parents on February 1971, and the family have been residing in the village of Yigo since then. The Leones family’s emigration from the Philippines to Guam was made possible through the sponsorship of his late maternal uncle Tomas Degano Visperas and his late wife, Maria Talavera Flores Visperas. Lito was naturalized United States citizen on July 2, 1976.

Before migrating to Guam, Lito graduated from Cape Bolinao High School in Bolinao, Pangasinan, Philippines in 1970. Joined the United States Army and was stationed at Fort Jackson in South Carolina in September 1977 and was honorably discharged in December 1977. His work experiences include Laborer for Carpet Corner (1973-1975), Bagger for Pay-Less Supermarkets of Guam (1972-1973), Warehouseman/Delivery Man for Townhouse Furniture (1972-1976), as a Self- Employed Taxi Driver (1976-1982), Warehouseman and Driver for Ace Hardware (1982-1984), as an Iron Worker for Black Construction Corporation (1986-1988), and as Warehouse Worker/Materials Handler for the Receiving Section of the Defense Commissary Agency at U.S. Naval Station Guam from October 1988 until he retired in May 2015.

During the time his daughter, Divina, was teaching at Daniel L. Perez Elementary School and Machananao Elementary School, he volunteered to assist in the preparation of the opening of the school year.

Lito is excited and is looking forward to work with Mayor-Elect Anthony Sanchez for the betterment of our community, for the people of Yigo. Lito’s work experiences and community involvement will aid him in his best efforts to serve in his new capacity as Vice Mayor-Elect.