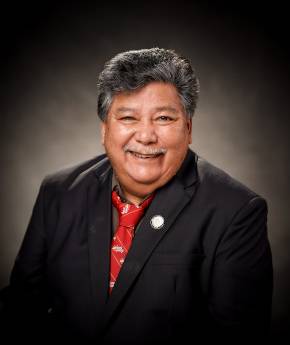 Mayor
Municipality of Hagåtña
John Aguon Cruz (known as “Chaka” by many) was born on September 13, 1954 to the late Teresa Aguon Cruz and the late Francisco Taijeron Cruz. John grew up in Aniguaand graduated from John F. Kennedy High School in 1972.

John worked for the Government of Guam and retired in 1996 after 25 years of dedicated service. Together with his family, John actively participates in community sports and Hagatna village activities and was a player-coach in various basketball leagues for many years.

John and his family are also active members of the Dulce Nombre de Maria Cathedral-Basilica Catholic Parish in Hagatna and he is a member of the Southern Guam Lions Club, with an emphasis on sight conservation. In 2016 he became a board member for the Catholic Cemeteries.

John supports organizations that assist the residents of Hagatna (and the rest of Guam) with their needs and volunteers some of his time towards this cause. A lifelong resident of Hagatna, John envisions Guam’s capitol as being a clean, revitalized and bustling business, historical and cultural hub, and one that is worthy of its designation as the capitol of Guam. John’s desire to see this become a reality with strong, positive influence of his father-in-law, the late Commissioner Tomas Flores Mendiola, who inspired him to run for Mayor.

First elected in 2004, he was re-elected in 2008, 2012, 2016 and again in 2020. John is looking forward to another challenging but rewarding four years of serving the people of Hagatnaand in the process, all of Guam as well.

While in office Mayor Cruz worked diligently to renovate the Hagatna Mayor’s office where he can provide better services. His other accomplishments through his leadership, support, and efforts include the completions of numerous utility upgrades and projects in the village by the various agencies and departments. He continues to be a strong advocateand support the many businesses that operate in the community.