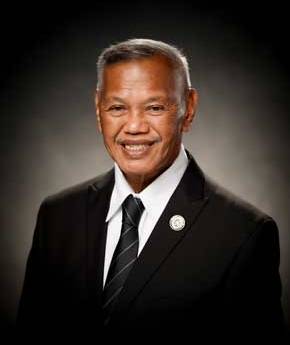 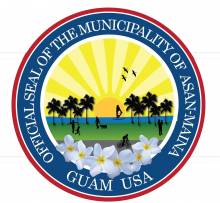 Mayor
Municipality of Asan-Maina
Mayor Frankie Anthony Salas is the son of the late +Joaquin Jesus Salas and +Maria Toves Salas (familian Chickagres, Bajesta, and Kururo). He was married to the late +Ruby Erickson Salas and recently lost his daughter, the late Jasmine Erickson Salas. He has six daughters, one son, and seven grandchildren. His common-law wife is Mary Santos Taitague.
Mayor Salas is a fine product of our public school system. He graduated from John F. Kennedy High School in 1970. Thereafter, he pursued higher education at the Guam Community College and University of Guam.
During his youthful years, he worked at Commercial Port of Guam while in high school then worked at Office of the Commissioner Municipality of Asan-Maina. With little or no break, he continued his government service with the Guam Retirement Division, Department of Administration and then the Department of Education, George Washington High School until his retirement in 2000. Mayor Salas also served in the U.S. Army Reserve and retired as a Staff Sergeant in 2010. During his free time, he continues to serve as a member of the Niño Perdido Y Sagrada Familia Parish Council in which he previously served as Vice President. He is also a Lifetime member of VFW Post 2917; Guam Un Guinaiya Lions Branch Club and the 368th Military Police Familia.
Mayor Salas’ accomplishments completed and/or on-going projects during his first term in office includes the clean-up and beautification of Asan-Maina, removing abandoned vehicles, white goods, tires, metals, and green waste; the painting of power poles for safety on Route 6 and Maina; Santa Ana storm drainage; Kalackac roadside clean-up and road repairs; K Street asphalt road improvement; Youth/Senior programs and activities; provided satellite services and outreach programs to our village; established the Asan-Maina Neighborhood Watch Program; preparation for our villagefiestas; Annual Asan Landing Memorial Ceremony; helping the homeless and the needy of Asan-Maina; renovations to the Asan Kindergarten Office, Dining Hall, basketball court, and children’s playground; LED Street Lights replacement throughout our villages; Rosary/Funeral logistical services; increased communication in the community via modern technology; and perform civil weddings. Extracurricular activities include but not limited to the Annual Community Easter Egg Hunt, United Airlines Marathon, Building of the Asan-Maina Liberation Float, Annual Asan Coastal Cleanup, Annual Halloween Trunk-A-Treat Maina and Extravaganza Drive Through Trick-Or-Treat due to COVID-19 Pandemic, Veteran’s Day Committee; Annual Manåmko’ Senior Citizens Month and Thanksgiving Day Luncheon, Annual Christmas Children’s Wish and Candy Drop; exercise programs to include Zumba, Hot Hula, and MixxedFit.
Mayor Salas continues to work with local and federal agencies regarding flooding issues in Asan; Unpaved Roads in Asan-Maina; GovGuam properties within our villages used by the U.S. Park Service but not maintained by Federal Government; Covid-19 Awareness/Food Distribution; Disaster Preparedness and Recovery efforts during Typhoons or other Emergencies.
Frankie Salas was first elected in 2016 as the Mayor of Asan-Maina, he was recently re-elected by the people of his village for a second term in 2020. He is forever thankful for the people of Asan-Maina for their vote of confidence and looks forward to serving his villages to the best of his abilities for the next four years. Despite the global pandemic Corona Virus-19, compounded by the fiscal constraints facing the local government, Mayor Salas’ dedication, commitment, and hard work inspires him to provide continuous improvements for a brighter future for his villages.