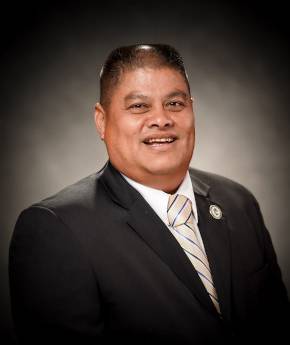 Mayor
Municipality of Mangilao
Mayor Allan Raymond Garcia Ungacta was born on August 28, 1971 in the village of Mangilao as the second of five children of Peter T. and Rosalin G. Ungacta. He is married to Felicia Martinez (familian Rambat) the daughter of +Jose A. and +Josephine M. Salas. Together they are proud parents to Alana Felicia and Hayes Allan Ungacta. He is the grandson of +Florencio and +Ana Garcia. His maternal and paternal families, known as “Kala” and “Dingo,” are rooted in the Chamorro traditions of close family ties, respect, and religious faith.

Allan spent his elementary and middle school years at Saint Francis School in Yona and Untalan Middle School in Barrigada. Graduating from Guam Community College in 1989 with a vocational career studies in electronics. Through his school years, he found himself engaged in various school activities.

Immediately after graduation, Allan worked at N.P. Tech. In 1991, he was hired by Mangilao Mayor’s Office as a maintenance worker, working his way to become the Administrative Assistant to Mayor Nonito Blas. His time at the mayor’s office afforded him an extensive knowledge base and the passion to continue serving. He is a member of the Knights of Columbus and is a Board of Director for the Department of Public Health Guam Community Health Center.

During his tenure as both Vice Mayor and then Mayor, he reinstated the neighborhood watch program, continues to network with the Guam Police Department, oversaw numerous renovations to the village community and senior center, parks and baseball facilities, and he partnered with the Manenggon Memorial foundation to establish a memorial site for Mangilao’s lost but most definitely beloved.

It is his passion for the people of Mangilao that fuels his hard work and dedication to bringing them a life of quality.