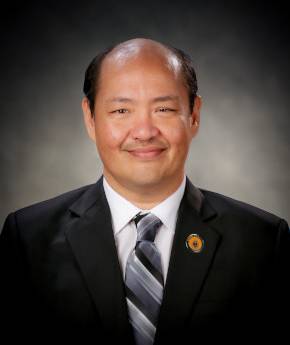 A major part of Rudy’s life is his devotion to his Catholic faith. He has been volunteering his time at the parish of Saint Jude Thaddeus for over 30 years, serving in various ministries including as a choir member, lector, Eucharistic Minister, religion teacher, retreat coordinatorand CCD Director and Principal of High School.

His work experience includes fifteen years in the service industry, two years with the Guam Mass Transit Authority, and eleven years with the Department of Education Division of Special Education where he assisted children with special needs. As part of his work, he has attended numerous trainings and received certificates from the Department of Education, Office of Civil Defense, Homeland Security and the Mayors’ Council of Guam for emergency response and management, bio-chemical hazards, shelter management, and weather spotting.

In 2005, under the Blas-Hofmann Mayoral Administration, Rudy worked as the Municipal Clerk for the Sinajana Mayor's Office. His direct work with the community impassioned his desire to serve in a larger capacity, therefore, he sought the office of Vice Mayor, and was successfully elected to three consecutive terms in the 2012, 2016, and most recent 2020 elections.

As Vice Mayor, he created and sustained programs to include the popular Summer and Christmas Camps, the Senior Citizens special events, our community education and training programs. Together with Mayor Robert Hofmann, he has worked toward making Sinajana a healthier, safe and comfortable place to live and thrive in. Together, they were able to successfully renovate and repair common facilities used by residents and the island-at-large. They have reorganized and restructured the budget and streamlined office and community operations. Together they built the first open air gymnasium, renovated the baseball field, the community center and erected a new playground, and look forward to continued progress and anticipate major projects to unfold including the construction of the Village Marketplace, the Central Community Arts Hall and the Central Fire Station. His greatest duty has been advisor to the Mayor on policies and programs regarding youth, community programs, intervention, health and manåmko’ that has brought many great successes for the community.

He is a dedicated government employee, a leader and a trusted friend with proven hard work, determination, unwavering commitment, and resourcefulness. His commitment to the people of Sinajana is to bring to life their hopes, dreams and interests for a safe, beautifuland evolving placeto call home.