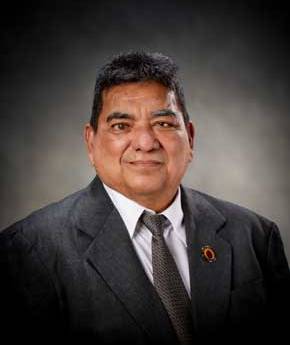 Mayor
Municipality of Agana Heights
Mayor Paul M. McDonald will be serving his eighth term as Mayor of Agana Heights, the village where he was born and raised. Paul M. McDonald will lead his prized village for the next four years. The fifth of twelve children of †Charles H. and Lucia Garcia McDonald, Paul is married to the former Elaine M. Zanoni, the daughter of †Leo P. and †Lourdes Gogue Ceraos of Agana Heights. Paul and Elaine are the proud parents to a son, Eugene (fiancé to Nikole Benavente) and two daughters, Yvette and Stacy (married to Christopher Flores). Together they are also the proud grandparents of four granddaughters, Keandra, Teah, Gabriella and Gia, and two grandsons, Aidan and Kole.
Since 1993, Mayor McDonald has dedicated himself to the people of Agana Heights and is no stranger to public service, having served as President and Vice President of the Agana Heights Elementary School PTO, the Agana Heights Blues Association President, was the 1st and 2nd Guam Youth Congress Representative for Agana Heights, and was manager and coach for various Agana Heights baseball teams. Paul also served as a board member of the Guam Visitors Bureau and served over ten years as a board member with the Guam Shipyard. He is serving his nineteenth year as President of the Association of Pacific Island Local Governments (APILG) and served nine terms as President of the Mayors’ Council of Guam (MCOG). A graduate of the U.S. Navy Apprenticeship School, Paul rose to the position of Planner and Estimator of SRF as well as President of the American Federation of Government Employees (Local 1689). He was the youngest union president nation-wide. As union president, he was instrumental in seeking compensation for asbestos related incidents.
As the eighth term Mayor of Agana Heights, Paul McDonald takes his job at heart, providing the residents with a myriad of services and activities for all ages. He organized sports leagues for both softball and basketball, and the Boy Scouts and Girl Scouts of America in Agana Heights; he established the “Fun In The Sun” Summer Program, the Agana Heights “Afterschool Hours” Program, the Summer Youth Employment, and the “Youths For Hire” Program. He promoted the Guam Community College Neighborhood GED Program, the Agana Heights “Graffiti Adoption” Program, the Neighborhood Crime Watch Program and the formation of the biggest (91 teams) and longest (27 years) existing Softball League ever.
His ability to bring people and organizations together to perform community projects such as the school cleanup, the village-wide cleanup, the stray dog control program, the Annual Easter Egg Hunt, the Annual Halloween Spooktacular, the Annual Agana Heights Fiesta, the Annual Agana Heights Coconut Fair, and the Annual Agana Heights Softball League and Fiesta Tournament demonstrates his ability to make use of the collective power that comes from getting people to work together to make things happen. Mayor Paul M. McDonald credits his success to his late father Charles H. McDonald who gave him the formula that only hard work and caring for people can bring about great leadership.