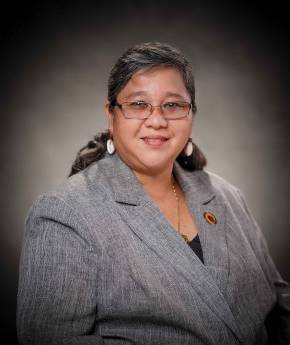 Mayor
Municipality of Dededo
Mayor Melissa Savares is the mother to Jonathan Kathleen (Maxine), Toby, Daniel (Xaiden, Xai’rie, Kai Haven) and Matthew. Her parents are Jose G. Oliva B. Savares. She is the granddaughter of former Dededo Commissioner Vicente S.A. Benavente Josefina Perez Benavente. She attended Santa Barbara Catholic School, Wettengel Elementary School and Notre Dame Catholic High School. She worked for Mac’s Specialized Services and the Department of Education at Maria A. Ulloa Elementary School, B.P. Carbullido Elementary School and DOE Maintenance Division. She served as the Vice Mayor of Dededo from January 2001 to December 2004. During her term, she served as the Secretary of the Mayors’ Council of Guam from January 2002 to December 2003.

In November 2004, she was elected as the Mayor of Dededo. She served as the President of the Mayors’ Council of Guam from January 2007 to January 2008, January 2010 to January 2013 and January 2018 to December 2020. She served as the President of the Association of Mayors, Vice Mayors and Elected Council Members (AMIM) in February 2008. She is a member of the Guam Community Health Centers Board from 2006 to present; a Commissioner on the Serve Guam Commission-AmeriCorps Program from 2007 to present; a Board member of CAHA from 2015 to 2017; Project Bisita Community Advisory Board; and a member of the Civilian-Military Task Force from 2007 to 2010. She served on the Liberation Day Executive Committee; 69th – 75th , Liberation Day Queen’s Parade Co-Chairperson; Hosted the 2016 Festival of Pacific Arts Performing Arts in Dededo.

She continues to partner with agencies such as GHURA for the renovations and restorations of facilities for our youths, families and our precious manåmko’; Guam Housing Corporation to restore abandoned homes to become affordable living spaces for families; the Department of Public Works to address road repairs restoration; Guam Police Department with Neighborhood Watch Program; and the Department of Public Health Social Services Senior Citizen Section for support of programs for manåmko’at the Dededo Astumbo Senior Citizen Centers.

Mayor Savares is an avid recycler and encourages all partners to Reduce, Reuse and Recycle. She thanks God every day for allowing her to serve her community in good health and peace.