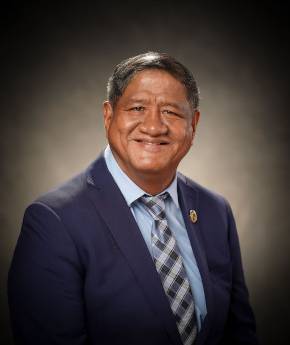 Mayor Chargualaf is a 1977 graduate of George Washington High School. From 1981 through 1987, he attended both the University of Guam and the Guam Community College studying Criminal Justice/Legal studies as well as Supervisory and Management courses and earned approximately 90 credit hours.

Throughout his career, Mayor Chargualaf performed numerous duties and held various positions in the Government of Guam including Youth Center Supervisor with the Department of Parks & Recreation and held several positions at the Public Defenders Corporation including Clerk, Special Deputy Marshal/Process Server, Special Deputy Marshal Supervisor, Legal Clerk Supervisor and retired as the Legal Administrative Services Division Supervisor on December 31, 1999.

Mayor Chargualaf was first elected in 2008 and has successfully held office after being re-elected in 2012, 2016, and 2020. Through this success, he soon to join his father as Malesso’s longest serving Mayor with five (5) consecutive terms.

His re-election is rooted in his continued dedicated efforts and bringing quality of life to his people and the progress and improvements to Malesso. His successful lobbying efforts have resulted in the construction of 216 new crypts at the cemetery; the completion of the long-awaited land exchange for the 32 families in the Land for the Landless Program; the repairs and renovation of the community center’s defective lights and dilapidated kitchen; the eventual takeover of the Merizo Pier Park; the dedication and renaming of the pier park as the Malesso Veterans Sons & Daughters Pier Park; the construction of the public restrooms at the pier park; and the most significant, the placement of the four government lots behind the Merizo Mayor’s Office under its administrative jurisdiction. With this effort, he has secured Malesso’s ability to accommodate future expansions as it continues to grow. He is presently engaging with the Guam Power Authority in the repair and restoration of the Merizo Baseball field lights; he is awaiting the approval of the grant to make repairs and renovations at the pier park dock; and the Lieutenant Governor’s feedback in his pursuit for the construction of an outdoor gym.

Mayor Chargualaf would like to thank his families, friends, supporters and most especially, the people of Malesso for the opportunity to serve again. He recognizes, acknowledges, and thanks his past and present staff and Municipal Planning Council for their dedication and service to Malesso – they have been his support through the years, giving him the ability to bring a better quality of life to the people of Malesso.

With so much still to be done, Mayor Chargualaf has always been ready, willing and is able to get things done. His continued dedication, honor, and pride to serve will always keep the village and her people’s best interest at heart. BIBA MALESSO!