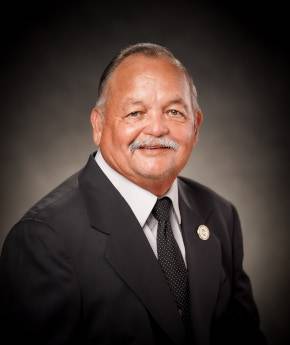 Mayor
Municipality of Sånta Rita-Sumai
Dale Eugene Alvarez was born on August 29, 1949 in the village of Sånta Rita-Sumai, Guam to +Isabel Aquiningoc and +Jerry T. Alvarez. He is the second oldest of twelve children. He is married to the former Helen Sablan Perez, daughter of +Walter Aguon and +Nary Sablan Perez. Together, Dale and Helen are the proud parents of six children and the happy grandparents to eighteen grandchildren.

He attended J. P. Torres Elementary; Agat Junior High and graduated in 1967 from George Washington High School. In 1970 he attended the Manpower Development Training Act and in 1972 entered into an apprenticeship program with the U.S. Navy Public Works Center, graduating in 1974 as Boilermaker journeyman. Mayor Alvarez’s work experience includes serving in the U.S. Navy from 1967 to 1969 and is a Vietnam War veteran. In 1970, he worked as a sandblaster at the U.S. Navy Ship Repair Facility in Guam.

Following his apprenticeship, he worked for the U.S. Navy PWC at the Piti Power Plant and held several positions at PWC, including Shop Planner, Maintenance Supervisor I and Quality Assurance Evaluator, retiring in 2002 from PWC. From 2003 to 2008, he was a Quality Assurance Evaluator, and later a Performance Assessment Representative for defense contractor, Alutiiq, LLC. He was elected to the office Mayor of Sånta Rita-Sumai since 2009 to present.