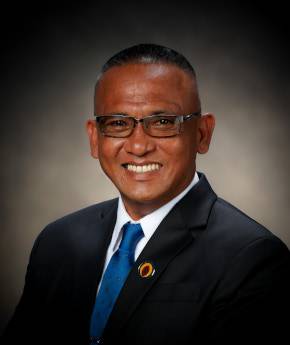 Mayor
Municipality of Yona
Born September 5, 1970, Bill is the youngest son of the late †Manuel Cruz Quenga and †Isabel Aguon Quenga. He is married to Marie Elizabeth Taijeron Quenga and is the proud father of Audrey, Byron, Jeremy, Bill Jr., Myah and Madison. He is the grandfather of Zeikyn, Zhayvin, Zeniah, Kyrie, Braden, Kaylee and Bailey.

He coached the Yona, Babe Ruth Big League 16-18 in 2006 and Babe Ruth 9-10 in 2007; and has taken both his teams off-island to Reno, Nevada and Salt Lake City, Utah for the Cal Ripken All Star Tournaments. He also had the privilege to coach the Girls Fast Pitch Softball Senior league which made it to the Little League World Series in Sussex, Delawarein 2015.